April Coffee Roasters in Copenhagen is headed by Patrik Rolf who has an impressive coffee resume with an uncompromising approach to sustainability and quality.

Were you always into coffee, what were you doing before coffee and what got you into coffee?

I started in coffee about eight years ago, and started because of Da Matteo in Gothenburg. I was just a regular in their coffee shop and was doing some consultations regarding marketing and business development with a company I had together with the founder of da Matteo - Matts.

So I’m in coffee because of one person more than anything else and it's a person called Matts Johansson, who started Da Matteo. He was and is a huge inspiration for me today as well and if I didn’t meet him, I would never have ended up in coffee because he introduced me to everything to do with coffee.

I competed in coffee before I started working with coffee as well. I competed in a barista cup and that was very much because of him as well, because he allowed me to hang out in their lab to train.

I got into coffee because my idea at the time (which definitely has changed) was that coffee was very quality-focused, that it was very craft-focused, and authentic. I had an idea that people cared a lot about what was going on and how they can make stuff better. Not sure if I believe that today, but it doesn't really matter because I'm on a different path. That is basically the short story of it all.

Let's talk about your capsules, your coffee line. What was the tipping point for you to decide to use this Nespresso compatible format to share your coffee?

It was the fact that at a point when I tasted Nespresso for the first time, many years ago, instead of saying “this tastes off”, “it’s not nice”, “I don't like this”, “It's not quality” etc. So most people kind of disregarded it as just something that Nespresso does. But whenever I taste coffee products I don't like, I get excited.

It's the same that we have this cold brew line but I don't like cold brew. So instead of saying, we're never going to make cold brew, we say how do we do a cold brew that April likes - likewise with the capsules. Generally, capsules didn’t taste good, they had extractions issues, and a lot of materials issues (where everything was plastic in the beginning).

Then we asked ourselves, “How do we do a tastier one?”. That was the only incentive. Business-wise, it didn't really make any sense back then. We pushed a bunch of money into trying to make a tasty version of a capsule and it’ll be years before we recover the money we invested into making the capsules the way that we do.

I looked at Nespresso, the same way I do at La Marzocco and you guys have understood that as well right? Because you guys are creating your own machine. What Nespresso did was to create a brewing system, right? They didn't create a capsule, they created a brewing system - a machine that you can brew some kind of coffee beverage with. To me, that was amazing, because now we have a platform and you creating another machine now, which I hope is better. But I think the format of a capsule is amazing, it's consistent, fast, and tasty (if you do it well).

I think the biggest struggle with selling coffee as a product if you’re talking about coffee beans, it's the fact that someone needs to brew it. You sell them a bag of espresso beans, they need to take it home, start up their machine, dial into the grinders and I would say 9 out of 10 times our coffee doesn't taste the way that it should because someone else has to brew it. Which is what makes it difficult. Whereas with a capsule, we can guarantee 100% of the time that our coffee will taste exactly like we intended it to taste. It's a fantastic product.

So I'm super excited and have been for years since we started this whole product and I feel we're getting on top of it. Not convinced still, being as small as we are, it's a hard product to push because it's really a volume product.

Do you roast your coffee differently for capsules?

Yes, which you have to. We can’t go into too much specifics but the thing is for this brewing format, the temperatures and pressures are quite different from any other type of extraction. So, you can't really roast it the way you normally do, like how a lot of people take their espresso roast and put it into capsules.

Nespresso machines or your machine are not La Marzocco machines. It's not nine bar pressure, nor the same flow rate so it goes without saying that it's a different type of brewing and a different type of brewing requires a different kind of roasting. It's just like how we differentiate the espresso and filter roast where it doesn't make any sense to make one roast profile for both filter and espresso because you have a pressurised brewing method and an unpressurised brewing method with two vastly different flow rates. There's no way that the optimal version of a roast will be awesome for both. It might be good for both but if your goal is to make the best version of a coffee, having the same roast profile is just lazy.

I wake up at 5.30am every single day and after taking a shower I am out the door at 6am. What I like drinking now is actually tea, I am really into cold extractions with tea, so I take that with me in the morning and walk out the door to go for a walk for about 30 minutes - just walk without doing anything or listening to anything. It’s a great way to start your mind, I try not to think about anything. After that I go to the coffee store, usually there at around 7am and then have my first coffee at eight o’clock. Today my first coffee was a pourover made by Jo here at April, a Red Honey Processed Gesha from Volcan Azul. 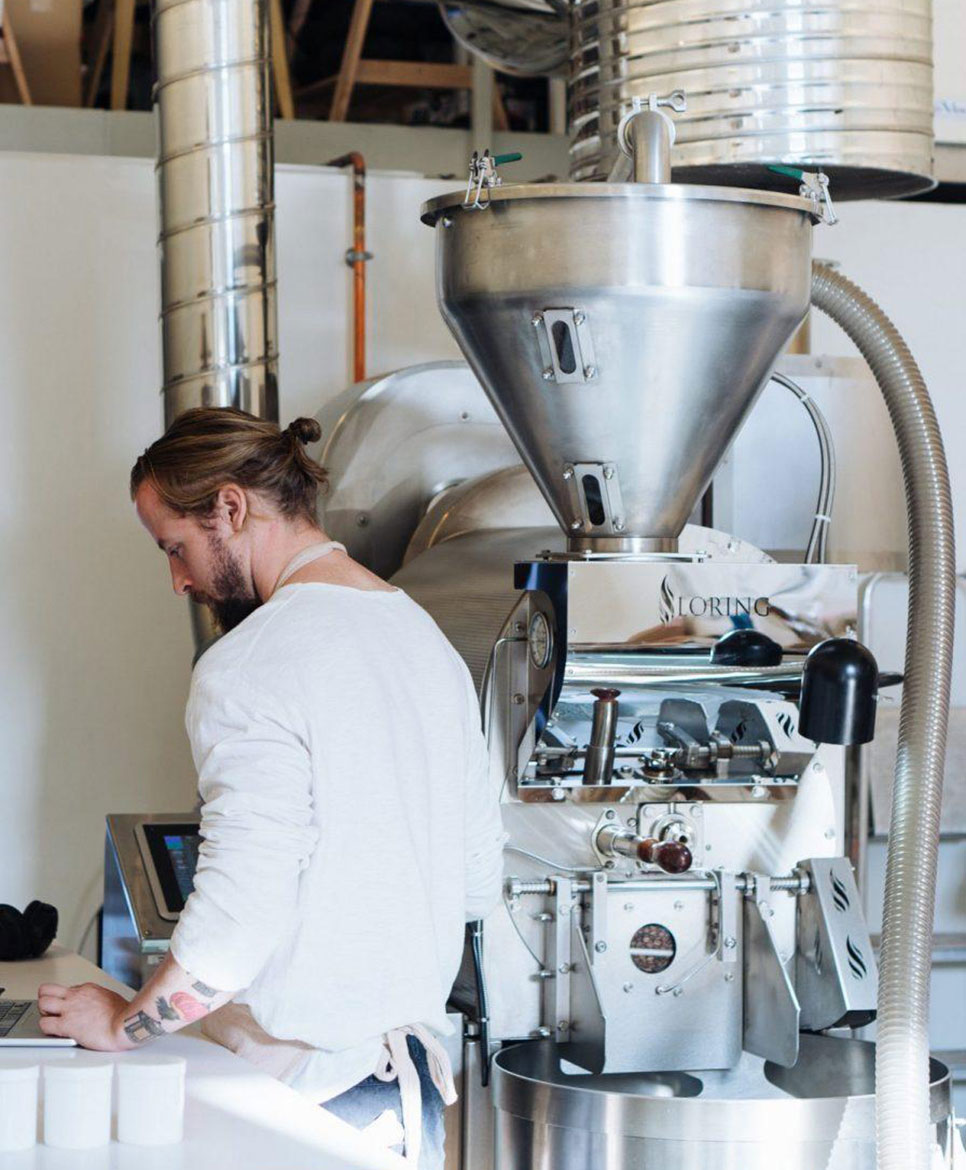 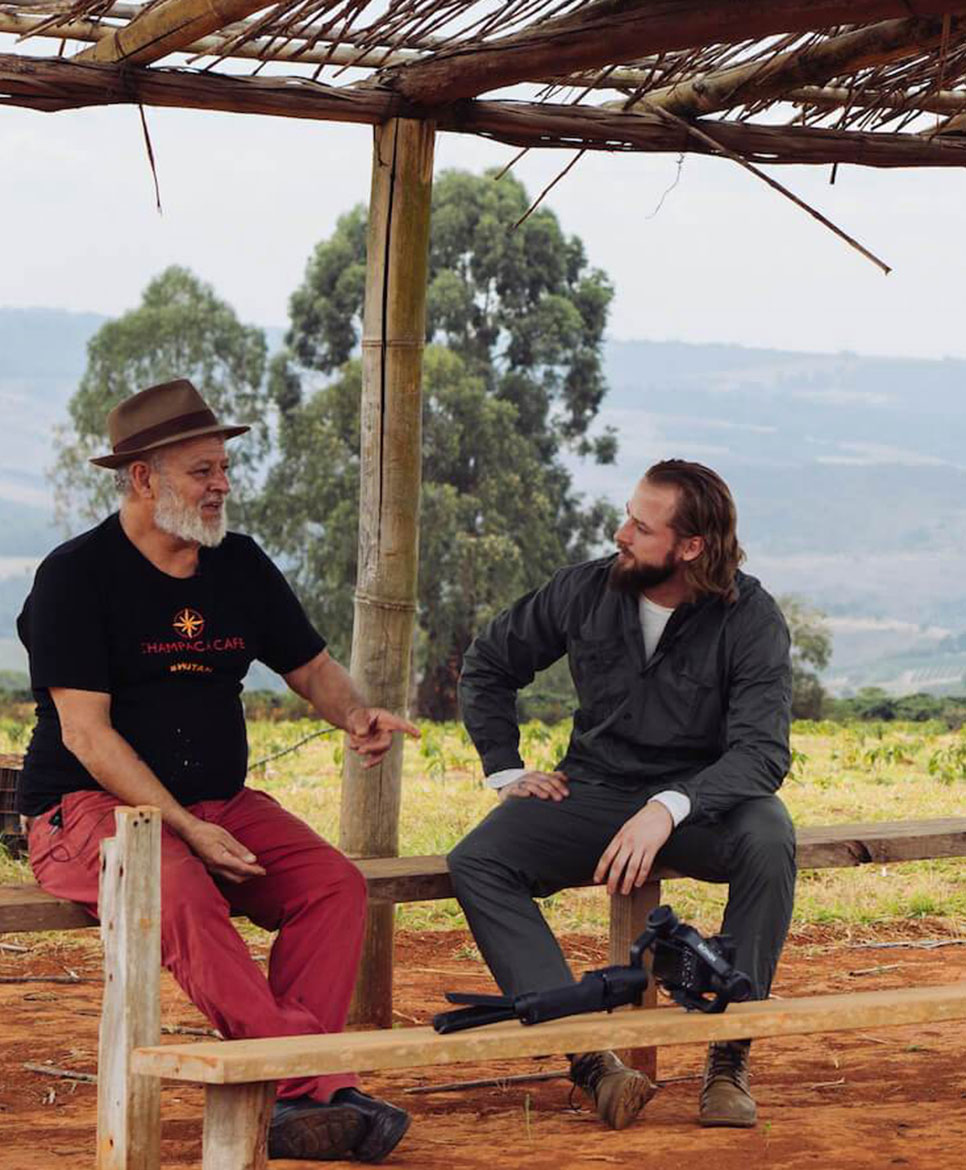